Mihoko Kumamoto has been at the UNITAR Hiroshima Office since 2014. She supervised the last few years of the UNITAR Hiroshima Afghanistan Fellowship and led the adaption of its model to other programmes. She has over 20 years of professional experience in the development cooperation field.

In this interview, Mihoko shares her interpretation of the AF mission and impact, and the office’s continued engagement with post-conflict countries.

UNITAR opened its third office, after Geneva and New York, in Hiroshima in 2003. Hiroshima is historic and unique: as a city that has experienced atomic bombing in 1945 and was reborn from its ashes into a beautiful, modern city, Hiroshima has witnessed first-hand the darkness as well as the brightness of humankind. Based in this symbolic place, the UNITAR Hiroshima Office strives to serve countries in difficult situations such as countries affected by conflict and least developed countries.

The Hiroshima Office started the Afghanistan Fellowship Programme as one of its first projects in 2003. Many dedicated professionals were involved in the design and launch of the programme. With support from many people in Afghanistan, Japan, and other parts of the world, the Afghanistan Fellowship became the Hiroshima Office’s flagship programme. It now boasts over 550 alumni. From the start, the programme was designed and implemented to enhance local ownership – a critical element to make it impactful. It took a demand-driven approach, was built on close consultations with local stakeholders, and engaged local people in curriculum design and delivery. For the people of Hiroshima, supporting Afghanistan, a country that has suffered from conflict for so many years, makes moral sense and is a source of pride. And it helps Hiroshima establish itself as a world center for peace.

I had two visions. The first one was to replicate and scale-up the successful model of the Afghanistan Fellowship in other countries. With the generous support from the people of Hiroshima Prefecture and Japan, the Hiroshima Office has been able to expand our activities to other conflict and post-conflict countries such as South Sudan and Iraq over the past five years. Our programmes in these countries have adopted key elements from the Afghanistan Fellowship, tailored to the local contexts. 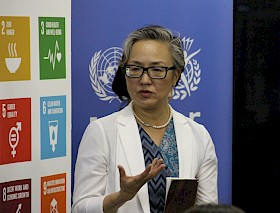 My second vision was to transition the Afghanistan Fellowship to the next stage. When I joined the Hiroshima Office, more than ten years had already passed since the programme was initially designed. Over these years, the situation in the country has changed significantly and so has demand from the people of Afghanistan. While maintaining the Fellowship’s success factors, it was important to match our services to the constantly evolving situation and demands of the country. After consultations with local partners, we launched the next phase of the Afghanistan Fellowship in late 2019, focusing more on leadership and innovation. Unfortunately, the COVID-19 pandemic has forced us to slow down the activities, but we hope to resume them sometime in 2021.

As I mentioned previously, we have replicated the Afghanistan Fellowship model in Iraq and South Sudan. The keys to success remain the same: we need to be demand-driven, enhance local ownership, and promote local solutions. At the same time, there are many differences among countries, such as history, culture, politics, infrastructure, socioeconomics, and others. So tailoring the programme to the local context is critical. For instance, in Iraq, the internet is relatively accessible, and many people use it as a main source of information. So online means are effective for communicating with our beneficiaries, delivering our services, and forming a network in Iraq. However, in South Sudan, access to the Internet is limited and digital literacy is low. We, therefore, use a hybrid style of communications involving computers, cell phones, and face-to-face discussions. We also make sure to include sessions to improve digital literacy. The key is to work closely with local partners and create a system where lessons learned are fed back into the activities in a continuous way.

There is a significant need to enhance capacities in Afghanistan.

I strongly believe that Japan, particularly Hiroshima, is uniquely positioned to provide much needed support to the people of Afghanistan for multiple reasons. First, Japan has gone through several violent periods in its own history. During the Sengoko period (1467 – 1615), Japan consisted of many territories controlled by warlords. Civil war, conflict, and violence were common at the time. Japan was a main player in various modern wars including World War II, causing significant damage and casualties outside Japan and taking a heavy toll on its own people and territory. Japan has seen aggression and darkness of humankind. Second, Japan represents a success model of post-conflict recovery and reconstruction. Hiroshima was the first city destroyed by an atomic bomb and burned into ashes. The city has been reborn into a beautiful, resilient, and modern city like the phoenix. Hiroshima is a pinnacle of post conflict recovery and continues to give hope to people around the world. The Hiroshima Office aims to respond to needs of post conflict recovery, peacebuilding, and sustainable development through training activities in diverse areas such as leadership, innovation, digital technologies, and entrepreneurship. The Afghan Fellowship Legacy Project is and will continue to be central to our work for Afghanistan, as it disseminates a universal and eternal message for humankind: treasure and protect nature and coexist with it. It will be a great honour for me to support the project and contribute to creating a harmonious and green future in Afghanistan and elsewhere.