The roundtables were an opportunity to address pressing Afghan issues with high-level panels from Japan and Afghanistan. A high-level Rountable was organized at the end of the Hiroshima workshops in each cycle. 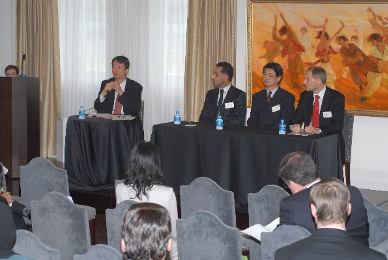 The 2008 Roundtable in Tokyo was entitled “Afghanistan’s Reconstruction – Challenges and Commitments,” organized in partnership with the Embassy of Afghanistan in Japan.

The 2010 Roundtable was organized on “Why is it important for Japan to continue to invest in Afghanistan's Reconstruction? The anatomy of the Japanese policy for engagement”.

In 2016 the Japanese Ambassador to Afghanistan, H.E. Mitsuji Suzuka, visited the Fellows during the Hiroshima workshop and conducted a roundtable discussion with them in Dari. The Ambassador was the keynote speaker at the 90th UNITAR Public Session, co-organized with the Institute for Peace Science at Hiroshima University. The Public Session also included remarks by First Secretary and Consul Mr. Ahmad Bashir Ghafoori from the Afghan Embassy in Tokyo.

The Hiroshima Peace Memorial Museum and Park receives paper cranes from children from around Japan and the world with the hope that they will represent a small contribution to peace. For a long time hundreds of tons of paper cranes were simply stored by the city as every year more and more arrived. One NGO, the “Thousand Crane Project For A Hopeful Future”, proposed recycling these cranes into notebooks and other stationary products which can still carry the message of peace and be used by different people in different countries. The UNITAR Hiroshima Office was grateful to this NGO for the opportunity to distribute the notebooks to its participants, including those participating in the Fellowship for Afghanistan. It also provided the Fellows with a snapshot of what creative and engaged NGOs could initiate.

In addition to the workshop, participants had the chance to visit cultural sites on Miyajima Island and in Osaka, Tokyo and other cities where they were exposed to the importance of history, culture, religion and tradition in Japan, while being able to observe their co-existence with modern development.

Cultural exchange activities
helped the group not only to take part in Japanese traditions such as the tea ceremony, Japanese calligraphy, paper folding and mikan (mandarin) picking but also allowed the Japanese people present to observe and participate in Afghan traditions.

The Afghan cultural presentation in 2010 for an audience comprising of local people from Hiroshima community, academia, business sector and the government, was an Afghan cultural dance, a small exhibition of traditional arts and handicrafts, and traditional food tasting for the Persian New Year – Nowroz Holiday.

The study-trips to cultural, religious and historical sites on Miyajima Island included visits to the Itsukushima Shinto Shrine. 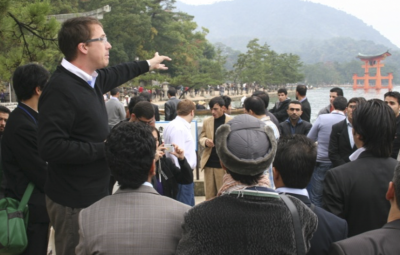 With reference to the visits to Hiroshima Peace Memorial Museum and Park and meetings with hibakusha, atomic bomb survivors, one participant wrote:
“The victim of A-Bomb filled my eyes with tears…”.
In a letter addressed to his mother, one participant wrote: “I wish there was no war in the world and wish that mothers sing the word of PEACE to the ear of their child just after giving birth”.

Often the visit to the Hiroshima Peace Memorial Park and Museum and a meeting with the hibakusha, or atomic bomb survivors, were among the most memorable moments of the Fellowship. The Fellows’ subsequent ‘journaling’ sessions revealed that Hiroshima’s story and harrowing accounts of survivors’ experiences in the immediate aftermath of the atomic bomb’s explosion gave participants a lot of courage, strength and renewed their determination to continue their efforts to  promote peace in their country, while also inducing sympathy and admiration for the people of Hiroshima, for the manner in which they dealt with the consequences of the atomic bombing. 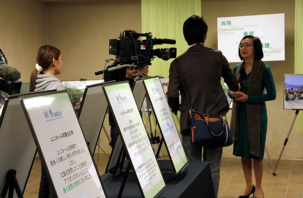 6 November 2014, Hiroshima, Japan – The UNITAR Hiroshima Office, together with the Hiroshima Prefectural Government, recently launched the inaugural “Faces of the Fellowship” Photo Exhibition. The Exhibition celebrates twelve years of the UNITAR Hiroshima Office’s’ successful “Fellowship for Afghanistan”. The photographs have been provided by a number of the over 400 graduates of the program and representatives of the alumni community, and serve to personalise Afghanistan’s current journey by showing their everyday life and setting, countering common images of Afghanistan as often depicted in traditional media. The exhibition also includes comments from the Fellows about their experiences whilst on the program in Japan, with particular regard to peace and post-conflict reconstruction.
The exhibition, held at the symbolic former Bank of Japan Hiroshima Branch – itself a survivor building of the atomic bombing – is supported by the Hiroshima Prefectural Government; the Hiroshima Peace Creation Fund; RCC Broadcasting; the Chugoku Shimbun newspaper; NHK Hiroshima; Hiroshima TV; Hiroshima Home TV; TSS TV; and Hiroshima FM.
Following the conclusion of the Exhibition in Hiroshima, it will travel to several locations around Japan, including United Nations University in Tokyo.
The exhibition opening ceremony was covered by NHK Hiroshima and the Chugoku Shimbun newspaper  (Hiroshima Peace Media Centre article – in Japanese only).

AF and the Green Legacy

Since 2011, the Green Legacy Hiroshima (GLH) campaign has been spreading the seeds and saplings of trees that survived the atomic bombing of Hiroshima on August 6, 1945. Global partners receive seeds and 5 saplings after a screening process, with each potential partner committing to the long-term care of the saplings and their message of peace. With the support the AF Alumni network, Afghanistan was one of the first countries to receive seeds and saplings from GLH. This initiative is now being expanded to the AFLP Legacy Project – Botanical Gardens Network (AFLP BG-Net).