The third EDEN Seminar, on botanical gardens network for Afghanistan, was held at Shizenkan University on January 31st, 2020. The evening started with a moment of silence in the memory of the late Dr. Tetsu Nakamura, the source and the inspiration for everything that can and should be done from Japan for Afghanistan.

The Seminar was the brainchild of EDEN co-founder Dr. Nassrine Azimi, who has initiated the Afghan Fellowship Legacy Projects to spearhead a campaign for the creation of botanical gardens in Afghanistan. At the Seminar the Afghan Ambassador Dr. Bashir Mohabbat gave a comprehensive overview of the land and the people, and the potential and vast diversity of the country. Nassrine spoke of the context and vision behind the botanical gardens network campaign and the practical steps ahead for its implementation. Professor Hiroshi Naito, whose Makino Garden of Plants and People in Kochi is one of the best of its kind in the world, spoke about some fundamental principles to respect in creating a botanical garden—notably people, time and the connections between the buildings and nature. The Q&A session was vibrant and informative and the concluding remarks, by Professor Miyoko Watanabe, Vice President of the Science Council of Japan, managed to be both practical and inspirational. Once again attendees came from vastly diverse backgrounds—business people and scholars, artists and architects, diplomats and students —representing some 12 nations. The support of Shizenkan and Ritsumeikan universities was essential and we are grateful for their steadfastness. Finally thanks to the generosity and professionalism of the Afghan Embassy in Tokyo participants could taste, see and hear a range of treasures from Afghanistan—saffron juice, nuts and dried fruits, carpets and lapis-lazuli, music and images—the richness of the land, and the hopes and dreams for its future, were on full display.

Context: Maintaining life, lives and livelihoods in harsh and arid conditions has been a part of Afghan culture for millennia—captured in indelible images of fruit orchards and flourishing green oasis amidst stark, dry plains and valleys. These legacies, of a resilient agricultural society where the wonders of the Kariz (Qanat) water system allowed cultivation even in the severest drought, are now being challenged by decades of war, poverty, insecurity, overpopulation, ecological degradation, and the speed with which climate change is altering the natural environment— increasingly undermining conditions that once sustained inhabitants of these ancient lands.

The picture is far from all bleak, however. Superb advances in plant sciences have helped many countries contain, and sometimes even reverse, similar threats to plant life, in particular in the face of the looming climate crisis. But the often under-appreciated, central loci of most such research are botanical gardens—no longer merely as hubs of aesthetic beauty or luxury but as indispensable and hard-core guardians and reservoirs of knowledge, know-how and experimentation, vital to the survival and adaptation of plant life.

Shockingly, however, many countries, regions and cities around the world do not have a single functional botanical garden. Afghanistan is one of them.

Objective: The Hiroshima Afghan Fellowship Legacy Projects (AFLP), as well as the EDEN Seminars team and their many partners in Japan and beyond now aim to address this fundamental lacunae through a botanical gardens network initiative in Afghanistan. Thus far a number of different cities/ecosystems have expressed interest to start the pioneering work—designing and consolidating plans throughout 2020, for implementation from early 2021 onward. Thereafter it is hoped the initiative can extend, adapt and be used as a blueprint for other cities in Afghanistan and further, along the Silk Road, for example. The vision is resolutely not that of a single object but of a network of botanical gardens dedicated, as a matter of priority and in the main, to research of plants relevant to food, medicine and ecological restoration. These botanical gardens 4 must furthermore be resilient, low-cost and easy to maintain in the most constrained of circumstances. They must be built with local material, yet allow for the practice of first-class scientific work, experimentation and conservation. They must be sustainable over decades, even centuries.

Structure: The AFLP/EDEN Initiative will have its main hubs in Afghanistan and Japan, but be multipartners and multidisciplinary, composed of a network of professionals or institutions from around the world. It aims to create a common platform for gardeners, botanists, architects and landscape designers, medical and agricultural experts, educators, policy-makers and development practitioners. As with other projects in the EDEN portfolio, the main emphasis will be to support universities as the long-term sustainable hubs for said botanical gardens.

During the EDEN Seminar on January 31, 2020, hosted by Shizenkan University in Tokyo, the contours of this initiative were presented and discussed by various partners (see LINK to EDEN site). A follow-up EDEN training workshop is planned in Tokyo, May 12-14, 2020, to be designed and conducted by AFLP advisors at the San Diego Botanical Garden, and its partners at the Denver Botanical Garden and Botanical Gardens Conservation International (BGCI). The aim of the workshop would be to identify priorities, possibilities and methodologies, helping the various teams and task-forces working in Afghanistan. The May workshop should also help AFLP establish a science committee and a design committee, to oversee and help with the progress of projects, and provide guidance as needed to Afghan teams.

Background History: The Hiroshima Fellowship for Afghanistan (AF) was started in 2003 by the United Nations Institute for Training and Research (UNITAR). During its 15-year span, the AF provided training to an estimated 500+ mid- to senior-level Afghan professionals. The last cycle of this unique program was completed in early 2019, and the activity closed. In an effort to cement its many legacies, however, the original core team and faculty have rallied, to help mobilize the AF alumni network around two legacy projects—one a collective book, and the other the creation of a network of botanical gardens in Afghanistan.

The idea had been maturing for years. Indeed since 2011, the Green Legacy Hiroshima (GLH) campaign has been spreading the seeds and saplings of trees that survived the atomic bombing of Hiroshima on August 6, 1945. Now in some 37 countries and working for the most part with botanical gardens and universities, GLH was set up as a voluntary activity, benefitting from in-kind support from numerous partners in Hiroshima and beyond. Global partners receive seeds 5 and saplings after a screening process, with each potential partner committing to the long-term care of the saplings and their message of peace.

Afghanistan was one of the first countries to receive seeds and saplings from GLH. However the absence of a strong botanical garden, or a network of botanical gardens, dedicated to nurturing, studying, experimenting with and recording plant life has stymied GLH’s best of efforts. Thus the need to address this lacunae. The AF network is strong, so local know-how and support, including through dedicated government officials and universities, can be forthcoming. The initiative can build on the experiences of and support of this and other GLH alumni networks, architects and botanists in Afghanistan, Japan and other countries/territories.

Expected Outcomes: Over the next five years the AFLP, the EDEN Seminars and their many partners hope to bring forth ideas, rally best practices, and facilitate the work of Afghan colleagues in improving the resilience of Afghan settlements to counter nature’s destruction, rising aridity and food scarcity, particularly for impoverished communities. The initiative will blend indigenous expertise in Afghanistan with experience from beyond its borders, to create a blueprint for the design of prototypes for low-cost, sustainable botanical gardens. This is not just a vital and pressing necessity for Afghanistan but could be of great benefit to other countries as well, and furthermore help them meet many of their commitments under the UN Sustainable Development Goals (SDGs).

Watch the full length recording of the EDEN III seminar below. 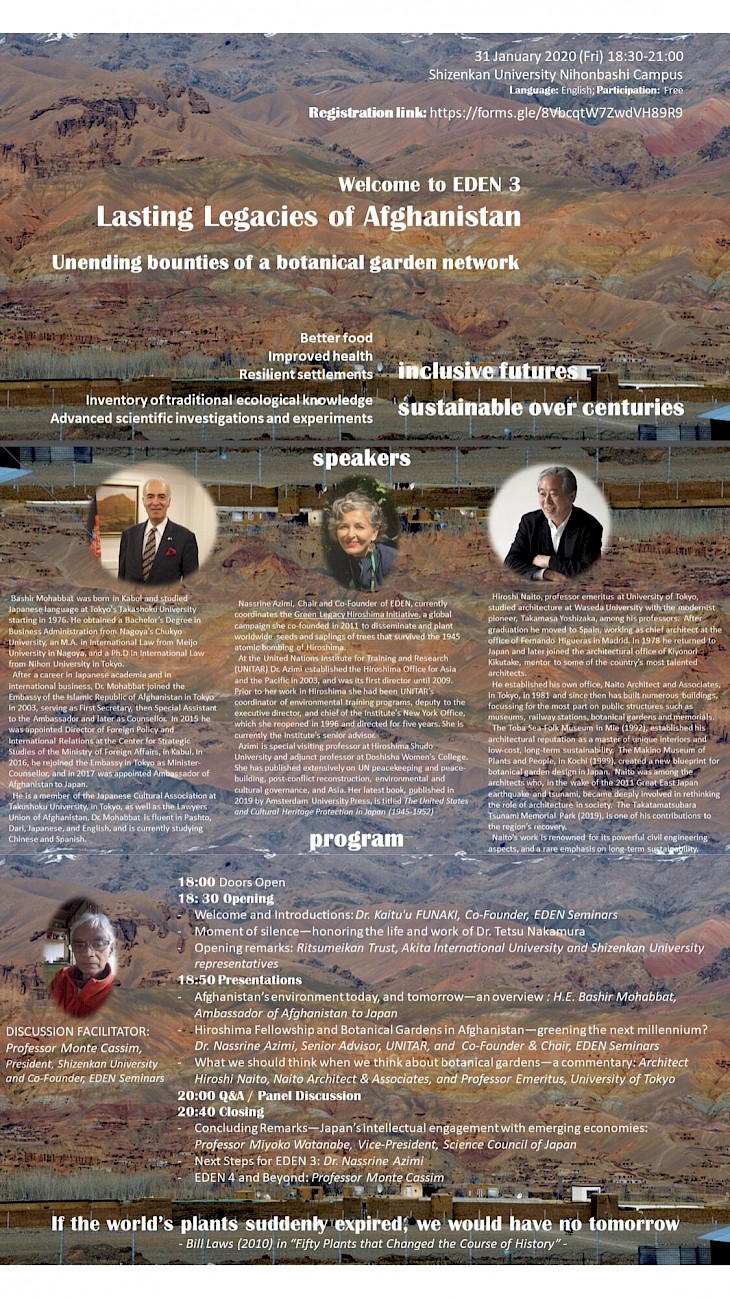