AFLP is happy to welcome Dr. Michael A. Fors as new member of its BG-Net international advisory committee. Dr. Fors has been a long-standing core faculty member of the Hiroshima Fellowship for Afghanistan from its inception and an advisor to the Institute (See Dr. Fors’ brief bio below).

Dr. Fors and Humaira Khan-Kamal led the Grant-Writing/Fundraising Workshop for AFLP/BG-Net. In the first of the two-part series, participants learned some of the basic concepts of fundraising and components of a project proposal, and also heard from UNITAR AFLP Community Leaders about their fundraising practices in an Afghan context.

Kabul, Bamyan and Paktia university teams will start to prepare project proposals based on the information they have learned at the workshop. They will initially focus on seed money grants as the first phase of their fund raising.

PowerPoint presentation of the workshop is available from the link. 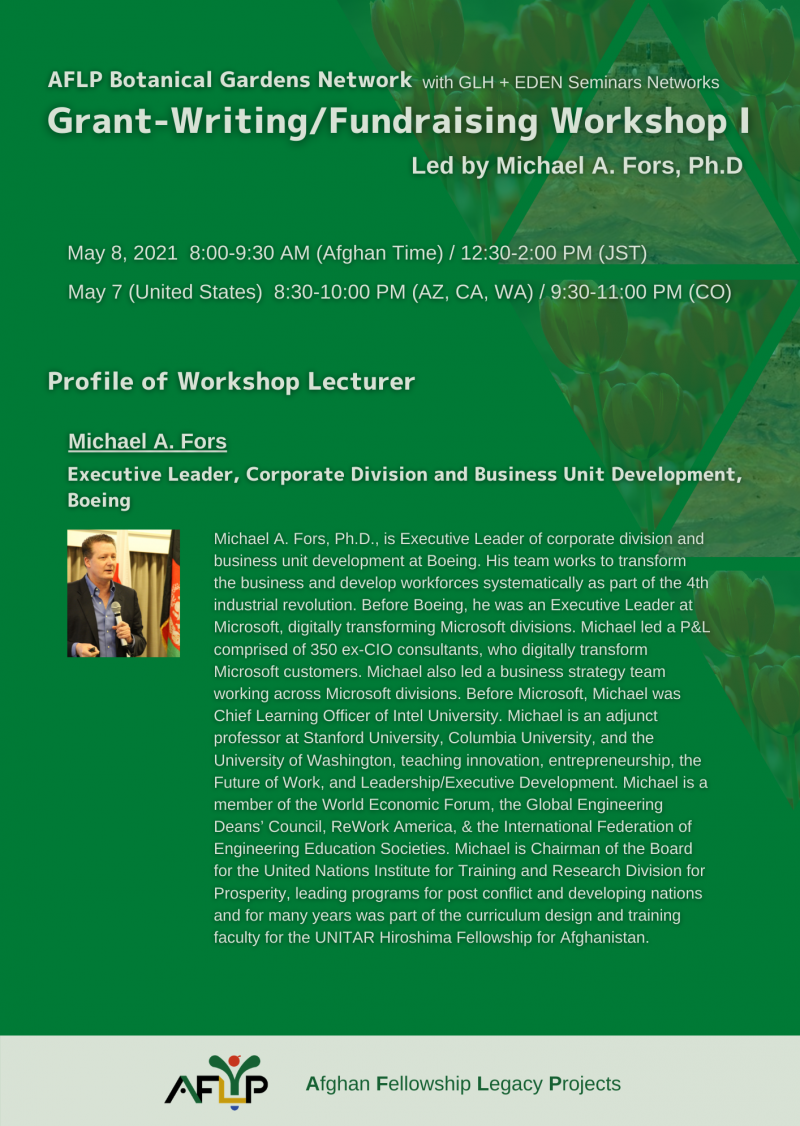 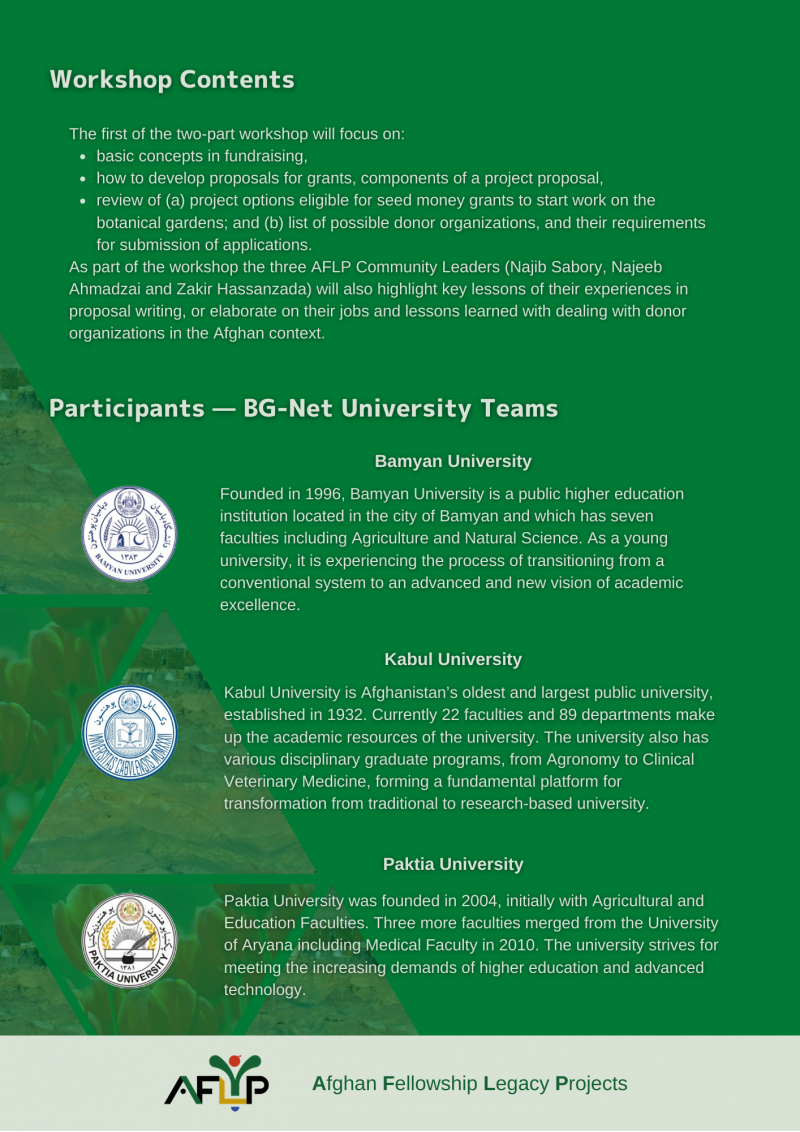 Executive Leader, Corporate Division and Business Unit Development, Boeing
Michael A. Fors, Ph.D., is Executive Leader of corporate division and business unit development at Boeing. His team works to transform the business and develop workforces systematically as part of the 4th industrial revolution.  Before Boeing, he was an Executive Leader at Microsoft, digitally transforming Microsoft divisions.  Michael led a P&L comprised of 350 ex-CIO consultants, who digitally transform Microsoft customers.  Michael also led a business strategy team working across Microsoft divisions. Before Microsoft, Michael was Chief Learning Officer of Intel University.  Michael is an adjunct professor at Stanford University, Columbia University, and the University of Washington, teaching innovation, entrepreneurship, the Future of Work, and Leadership/Executive Development.  Michael is a member of the World Economic Forum, the Global Engineering Deans’ Council, ReWork America, & the International Federation of Engineering Education Societies.  Michael is Chairman of the Board for the United Nations Institute for Training and Research Division for Prosperity, leading programs for post conflict and developing nations and for many years led the curriculum design and training workshops for the UNITAR Hiroshima Fellowship for Afghanistan.

AFLP Coordinator
Humaira Khan-Kamal has worked with UNITAR since 1996, as a UNITAR Special Fellow, as Training Associate, and from 2012 to 2016 as Senior Advisor to the UNITAR Fellowship for Afghanistan. In her first assignment at UNITAR she was directly involved in developing the UNITAR New York Office Work Program for Government Officials based in New York. She was responsible for research, development, planning, and coordination of several training programmes in specific thematic areas. Her projects included annual intensive courses on international trade, public-private partnerships for sustainable development, and policy issues in information and communication technologies, as well as workshops on basics in technology for senior policy makers and negotiators. With the opening of the UNITAR Hiroshima Office in 2003, Khan-Kamal was involved in the overall design, launch, and management of the Fellowship project on post-conflict reconstruction and training in Afghanistan, and served as Program Leader till 2011.

AFLP Team Leader
Nassrine Azimi is co-founder and coordinator of the Green Legacy Hiroshima Initiative, a global campaign to disseminate and plant worldwide seeds and saplings of trees that survived the 1945 atomic bombing of Hiroshima. She is also co- founder and chair of the EDEN (Emerging and Developing Economies Network) Seminars.
At the United Nations Institute for Training and Research (UNITAR) where she is currently a senior advisor, Dr. Azimi established the Institute’s Hiroshima Office for Asia and the Pacific in 2003. Prior to that she was UNITAR’s coordinator of environmental training programs, deputy to the executive director, chief of the Institute’s New York Office, and for 12 years head of UNITAR’s Board of Trustees’ secretariat in Geneva, throughout the Institute’s restructuring and revival.