Prof. Nesar Ahmad Kohestani teaches at the Forestry and Natural Resources (FNR) Department, Faculty of Agriculture, Kabul University. He is the team leader for the Botanical Garden initiative at FNR and Head of Botanical Garden Committee of Kabul University.
Prof. Kohestani has over 30 years of professional experience as lecturer and researcher at various universities. He was Dean and Head of Department at the Faculty of Agriculture, Balkh University. He was assistant Dean and Head of Department, Kabul University for 15 years; concurrently he was the Co-founder and Director of the Environment Conservation Centre for Afghanistan (ECFA) - Faculty of Agriculture Kabul University.  ECFA is the First Environment conservation Centre in Afghanistan. He organized the First Journal of Scientific Environment by ECFA under the name of MOHET.
Prof. Kohestani is a member of the International Bear Ceremony Committee (IBCC) - The Hokkaido University Museum Sapporo Japan. He has also participated at the Eminent Scientist’s symposium - Seoul Republic of Korea, as side event for the 5th Ministerial Conference on Environment and Development (MCED) 2005.  In 2010 he visited Purdue University, North Carolina State University and other Universities in Germany, Japan, China, India for academic purposes. He was the Member of Advisory Board of UNEP- Afghanistan, as an environment Expert from Kabul University; and member of informal Advisory Committee for Biodiversity of Wildlife Conservation for Afghanistan (AWEC).
Prof. Kohestani has authored several scientific textbooks in Principles of Systematics, Forestry, Ecology, National Parks and Protected Areas of Afghanistan, Wildlife, and published papers in national and international Journals.

Prof. Mohammad Hamid Hamdard is Head of the Botany Department, Kabul University. He was born in 1983 in Chak district of Wardak province, and completed his secondary education in Araban High School.
He entered the university in 2005, majoring from the Biology Department of Science Faculty of Kabul University in 2008. He joined the Swedish Committee for Afghanistan (SCA) as a school consultant.
In 2011, Mr. Hamdard started his career as an assistant professor at the Science Faculty of Kabul University. In 2015, he went to China to pursue his higher education, obtaining a Master’s Degree (MSc) in Botany in the College of Life Sciences in Central China Normal University.
During his work with Kabul University, Mr. Hamdard has actively participated in a number of international and regional academic and cultural events. In 2013, he attended a two-month Training programme in Botany, organized by Delhi University in India. In 2019, he attended The 2nd China South Asia Media Cooperation Forum which was held in Yunnan Kunming, China, where he presented a paper on the expansion of ties and cooperation between Afghanistan and China and other regional countries. In 2019, he took part in Afghanistan and Central Asia young researchers’ workshop in Dushanbe, Tajikistan.
Mr. Hamdard has published in national and international scientific journals. Some of his articles are Drinking water quality assessment and governance in Kabul: A case study from a district with high migration and underdeveloped infrastructure; Bacteriological and Protozoan Features of Drinking Water in Kabul City; Effects of some Environmental Factors on plants; Effects of Chemical Elements on plants; The Reaction of plants towards specific stimuli.
Currently, Mr. Hamdard is serving as lecturer and Head of the Botany Department, Faculty of Biology, Kabul University.

Prof. Farida Shoaib Vedi is Associate Professor at the Faculty of Biology, Kabul University.
She was born in 1975 in Nijrab district of Kapisa province, and completed her secondary Education in Sultan Razia High School. She started her higher education (Bachelor Degree) at the Biology Department, Science Faculty, Kabul University.
In 2002 Mrs. Farida Shoaib Vedi started her career as an assistant professor at the Biology Department of Science at Kabul University. In 2009 she went to India and obtained a Master’s Degree in Botany, at the Botany Department of Delhi University. During her cooperation with Kabul University, Mrs. Farida Shoaib Vedi actively participated in a number of international and regional academic and cultural events.
In 2013 she attained the International training course on Gene Based Techniques for Research in Biotechnology (Division of Biochemistry Indian Veterinary Research Institute), Izatnager, Uttar Pradesh, India. In 2008 she attended (Two months training program for Kabul University under SHEP) in Delhi University .
In 2003 she attended short observation courses for gaining experience in the field of Biology in Bonn of Germany and in March 2006 she went to Tokyo, Japan for a Scientific Training Program for Chemical and Biological experiments in Ochanomizu University.
Currently she is serving as a lecturer in Botany Department, Faculty of Biology, Kabul University.

Dr. Abdulhaq Omari got his Bachelor of Science degree from Kabul University from the Department of Forestry and Natural Resources. He was hired as a lecturer at Kabul University, after a successful competitive exam in 2011. He then went to Tokyo, Japan, and completed his MSc in Environmental Conservation and his Ph.D in Symbiotic Science of Environment and Natural resources, both from the Tokyo University of Agriculture and Technology.
Dr. Omari has taught various subjects such as afforestation, range science, environmental conservation, fundamentals of forestry to the students of forestry since 2012. Additionally, he has published several articles in national and international peer reviewed journals related to environmental issues. He has also worked as a freelance translator with various NGOs and UN-Agencies from 2012-2014. In 2010-2011, he worked with the Ministry of Higher Education at the matriculation exam committee. Currently, he is working on how different biotic and abiotic technologies can assist plants growth in the very fragile environments such as in water-scarce and nutrient deficient condition.

Prof. Najib Rahman Sabory currently serves as Associate Professor and Head of the Energy Department of the Engineering School at Kabul University. He is Chairman of Afghanistan Renewable Energy Union (AREU) as well as the Rotating Chairman of Afghanistan Awareness and Analysis (A3), a Kabul-based think tank. He founded The Kabul Talks, a professional dialogue platform, and TechDoor, an engineering and science networking group.
He graduated from the Electrical and Electronics Department, Engineering School of Kabul University in 2001. He joined the teaching faculty of the same department after graduation. From 2009 to 2011, he served as Deputy Dean for the Engineering School. He received a Fulbright Scholarship in 2011and obtained a master’s degree in Sustainable Energy and a graduate certificate in Project Management from A. James Clark School of Engineering at University of Maryland College Park, the United States. He also earned an MBA in 2014 from the World Wide Science Academy in Malaysia. Sabory participated in the UNITAR Afghanistan Fellowship Program in 2007 and served as Coach and then Resource Person in 2008 and 2009.

First student (from minute 6:10): 'I am a fourth year student of KU Natural Resources and Forestry Department, and one of the members of the KU Botanical Garden committee.  We hope to make this a model university BG, our plan is to divide it into four zones, and raise and present plants from that exact region in the relevant zone.'

Second student (from minute 6:34 ): ‘I am a fourth year student of KU Agriculture Department. Our aim is to create a BG at KU. Right now the situation of this BG is quite bad, it is full of weeds, dried trees ….We want to have a representative BG that holds the diversity of plants from the entire country, and a model for the university.' 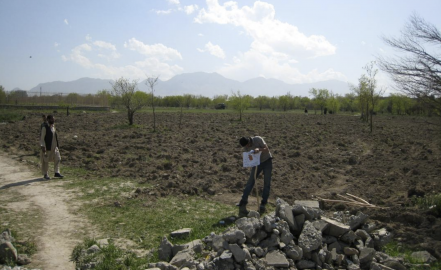 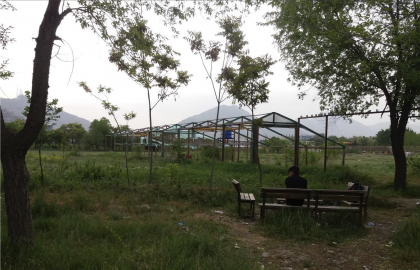